Disclaimer: I'm not a financial professional. If you've been given advice contrary to mine, take it. My advice might be bad for you. We're not filthy rich or anything.

My wife and I were no exception; all told, we had ~$110,000 in loans. We graduated in 2011, but due to deferment and standard lead times, we didn't get the bill until sometime in 2012. Most of the loans were private, some with interest rates over 10%. I remember very clearly when the first monthly bills came; over $1100.00 all told, more than our rent by nearly half. It was devastating. We had dreams for our lives together; weirdly, none of them were "let's pay down loans until we're fifty!"

I started budgeting in a sort of strange way; I bought a sports car.

In 2014, we went on a road trip; we rented a convertible and drove down the Pacific Coast Highway from Portland, OR to Los Angeles, CA, stopping at Fort Bragg and San Francisco along the way. 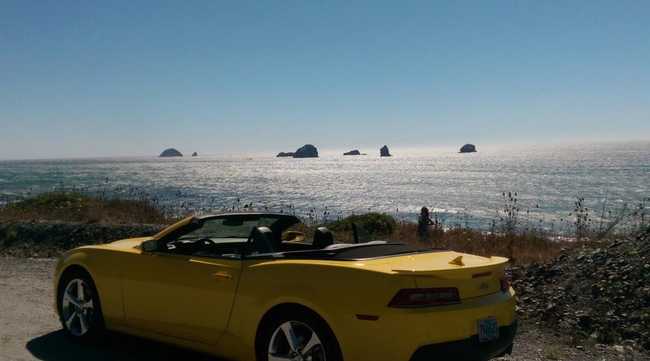 I decided I wanted a convertible; I started poking around on craigslist, looking at this or that; one day, a silver Audi TT caught my eye (it had AWD, so it was sensible for Pittsburgh, obviously). It was $18,000! I really didn't think I could afford that, but my wife encouraged me to go for it, if it fit my budget.

It was at that point that I realized I didn't HAVE a budget. I didn't have any idea where my money was going.

I sat down and figured out my income and my bills, and realized that the payment actually wasn't out of reach. A week later, I was driving my new (well, 2008) Audi home.

As you can see it was immensely practical.

(Funny story: I didn't know how to put the thing in reverse. I drove it straight to work, where all my coworkers gathered around the window, watching me drive it around the block three times before I caught a long enough break in traffic to look up how to do it [push the shifter down, thanks VW]).

(Additional funny story: I was so paranoid about it getting scratched or costly repairs that I sold it a year later for about half what I paid. Oof.)

Budgeting was an unbelievably empowering exercise. Before, I was constantly nervous about money I was spending - could I really afford this dinner? These clothes? This trip to see friends? Having a budget gave me a concrete understanding of where my money was going and was the key to putting our debt repayment into high gear.

There's great software out there to manage financing; Budget Simple, Mint, and YNAB to name a few. I have no strong recommendations; the budgeting software that you use is the superior budgeting software. Borrowing a expression I learned from my friend Matt:

"Hike your own hike"

In terms of how you structure your budget, here's my (also borrowed!) rules:

To make a budget, you'll need to figure out what your income and expenses are; If you do shift work and make tips, start tracking how much you earn and average it out per day. Figure out your fixed expenses: rent, utilities, debt. Subtract the two; if you're spending more than you're making, figure out how to make those two meet. Here's my "starter budget".

I can't stress enough how important emergency funds and budgets are; they will completely change your relationship with finances. You'll no longer have to stress about unexpected bills, and you can splurge guilt-free because you've planned ahead.

Once you've got your budget figured out, it's time to tackle the debt. There are two popular strategies for paying down debt: snowball and avalanche. Both of these involve progressively paying off loans and rolling the payments you would be making into the loans you haven't paid off. For example, if you're paying $200 a month on Loan A and $300 a month on Loan B, once Loan A is paid off you'd start paying $500 a month on Loan B.

A great tool to visualize and understand this is unbury.us. I'm not exagerrating when I say this tool changed our lives; it allows you to plug in the numbers for your loans, then start playing with things ("what would happen if we paid an extra $50?"). When we first did this, here's what things looked like (a.k.a. "Debt Mountain"): 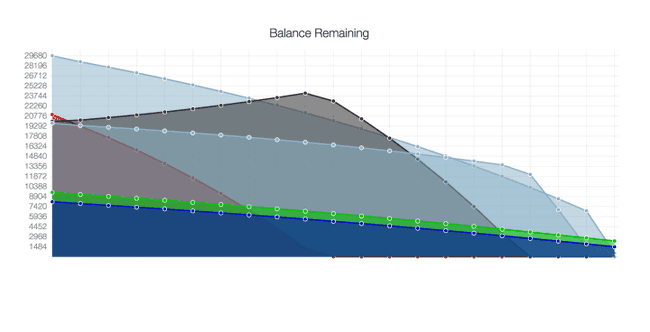 Because the entries are all saved in the URL, you can bookmark it and save your progress (or copy links to your spreadsheet, which I did!). Try feeding it some ridiculous numbers and look at your total savings in interest; ask yourself, is that number really all that ridiculous? Could you make it work?

Once you've got an idea of what you need to spend, you can start considering ways to come up with that money. A common refrain here is "earn extra income!". Frankly, I think that's pretty unrealistic, and mostly a line folks feed you to join their crummy multi-level marketing schemes. Don't get me wrong - extra income is great, it's just unreasonably hard to come up with if you're already working. Alternatively, lowering expenses is usually much more feasible, so I suggest starting there.

Note: this is not about punishing yourself. It's also not about avocado toast or Starbucks; it's about planning. During this time, we went out to dinner, had drinks with friends, took vacations; our lives were not dimishished.

Here are my suggestions on how to eke out some extra bucks, in order of radical-ness weighted by impact.

Warning: none of this is sexy.

Boiling down some of the above, here's how to prioritize your money going forward:

So how did all this go? Well, my numbers are probably imperfect, but:

On the one hand, I'm super proud of us and what we accomplished. It took a lot of discipline and hard work to achieve our goal. It was 100% worth it, too.

On the other hand, many of the systems that yoke people with debt are cruel and unfair. We really didn't understand what we signed when getting our loans; we also had literally eighteen years of people telling us that if we didn't go to college we were failures, and then four years of rosy employment and salary figures to temper any concerns (I was told I'd make $70k out of school... my first job offer was $30k IN MANHATTAN).

It's unfair and disappointing that debt, partcularly non-dischargeable student loan debt, has become such a central part of the story of an entire generation. For that reason, I don't take pleasure in writing this "guide" (aside from pride at having made it out). To that end, we both support student loan forgiveness, among other debt relief measures, and you should too.

It's also unfair to leave out how this was all possible; we got unreasonably lucky. We found a very cheap house, fell into successively better paying jobs, and Pittsburgh has remained affordable while cost of living in other cities have exploded. It's ridiculous that all of those things have to go well in order for two people to live without ruinous debt.

Good luck! I hope you find peace on your financial journey.